Warning this is a prototype. The content may not be complete or accurate.

Crimes against households, adults, children, businesses and society in England and Wales.

This page is part of the latest crime collection

Over the long-term, crime has fallen, but some crimes have risen slightly in the previous 12 months 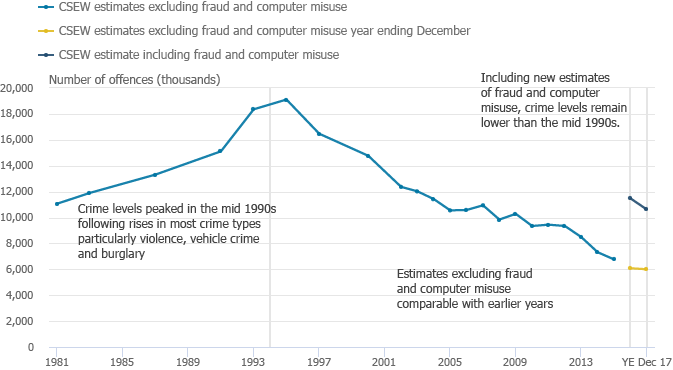 Pages in this collection:

Crime overall has fallen in the last year

Crime estimated by the Crime Survey for England and Wales (CSEW) shows crime overall has fallen in the last year, driven by a 28% decline in computer misuse.

Most individual types of crime, including violence, have stayed at levels similar to the previous year.

When looking at the main types of crime, changes were only seen in:

All other main types of crime measured by the survey showed no change.

Police recorded crime data are not designated as National Statistics. This data can be affected by changes in policing practices and victims’ willingness to report crime.

The police figures indicate rises in the following types of crime:

These offences tend to be disproportionately concentrated in London and other metropolitan areas; however, the majority of police force areas saw rises in these types of violent crime.

Police recorded crime data are not designated as National Statistics. This data can be affected by changes in policing practices and victims’ willingness to report crime.

This continues an upward trend seen in homicides since March 2014, indicating a change to the long-term fall seen in the previous decade.

These figures exclude the London and Manchester terrorist attacks in 2017. They also exclude the 96 cases of manslaughter from the Hillsborough disaster which were recorded in 2016.

Although the deaths at Hillsborough occurred in 1989, an inquest returned a verdict of manslaughter and therefore was recorded as a homicide in the year 2016.

Likelihood of being a victim has fallen considerably

Around 4 in 10 adults were estimated to have been a victim of crime in 1995; before the survey included fraud and computer misuse in its coverage.

In the year ending December 2017, just over 1 in 10 adults were a victim of crimes comparable with those measured in the 1995 survey.

Including fraud and computer misuse, 2 in 10 adults were a victim of crime in the year ending December 2017.

This page mainly reports on data from the Crime Survey for England and Wales (CSEW) and police recorded crime.

More information on both these sources can be found in the User guide to crime statistics for England and Wales.

Firearms
Crimes include shotguns; handguns; rifles; imitation weapons such as BB guns or soft air weapons; other weapons such as CS gas or pepper spray and stun guns; and unidentified weapons. These figures exclude conventional air weapons, such as air rifles.

Fraud
Fraud involves a person dishonestly and deliberately deceiving a victim for personal gain of property or money, or causing loss or risk of loss to another.

Sharp instrument
A sharp instrument is any object that pierces the skin (or in the case of a threat, is capable of piercing the skin), for example, a broken bottle.

Violent crime
Wide range of offences including minor assaults (such as pushing and shoving), harassment and psychological abuse (that result in no physical harm), through to wounding, physical assault and death.

A comprehensive guide to crime types and definitions can be found in the User Guide to Crime Statistics for England and Wales.

How do we measure this?

This page is part of our quarterly Crime Collection, which relies on two main sources of data.

Police recorded crime Crime that has been reported to the police, and recorded as part of police casework.

Police recorded crime data are not designated as National Statistics.

More information on both these sources can be found in the User guide to crime statistics for England and Wales.

More information on the methodology can be found in the Crime in England and Wales Quality and Methodology Information report.

What do you need to know?

Strengths and limitations of the data The Crime Survey of England and Wales (CSEW) has been consistent since 1981 and is the best source to use when looking at trends over time. It is also a better measurement of crimes which are less likely to be reported to the police, such as sexual offences.

Police recorded crime is a good measure for understanding how much work police forces are carrying out. It can be affected by changes in policing practices and victims’ willingness to report crime.

Time periods covered The Crime Survey for England and Wales data on this page are based on interviews conducted between January 2017 and December 2017, measuring peoples’ experiences of crime in the 12 months before the interview.

The police recorded crime figures relate to crimes recorded by the police during the year ending December 2017 (between January 2017 and December 2017).

Certified by the UK Statistics Authority as compliant with its Code of Practice for Official Statistics.
Learn more

More pages in this collection 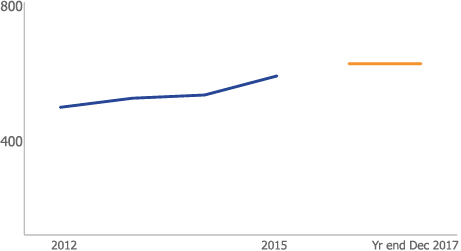 No change in the volume of fraud offences in the last year. 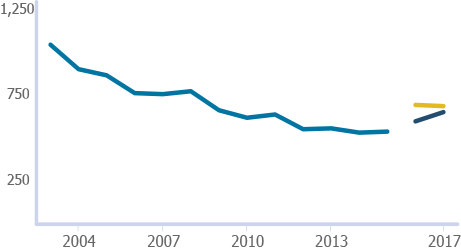 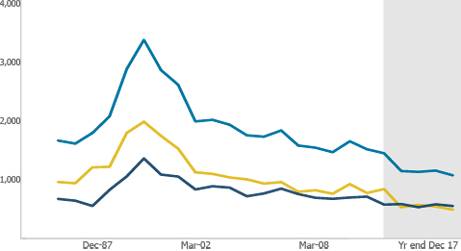 Little change in levels of violent crime in recent years. 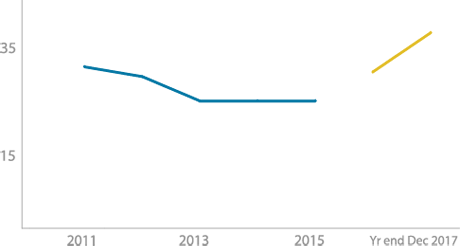