Warning this is a prototype. The content may not be complete or accurate.

Latest estimates of employment, unemployment, economic inactivity and other employment-related statistics for the UK.

Number of people in employment increases 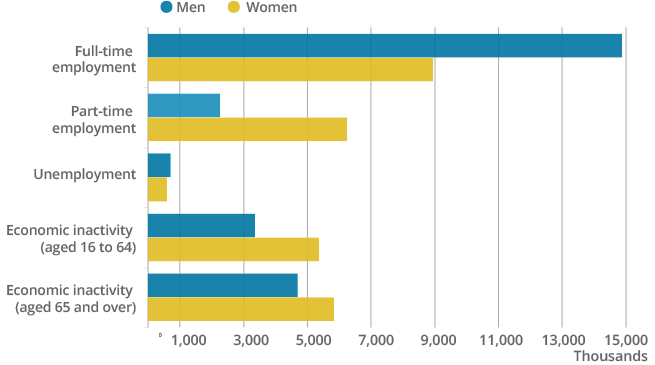 Between January to March 2018 and April to June 2018, the numbers of people in work and economically inactive increased while the numbers of unemployed people decreased.

Pages in this collection:

Quarterly and annual changes in the number of people in the UK labour market, seasonally adjusted 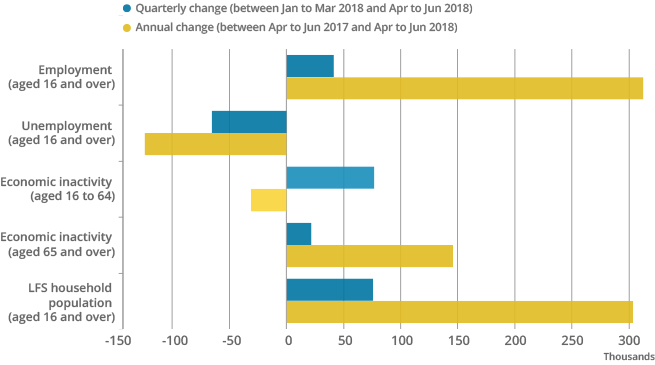 Labour market statistics
A measure of many different aspects of the labour market that provide an insight into the economy. They are also very much about people, including: their participation in the labour force; the types of work they do; earnings and benefits they receive; their educational qualifications; and their working patterns.

Employment and jobs
The number of people with jobs is not the same as the number of jobs. This is because a person can have more than one job. The number of people with jobs is measured by the Labour Force Survey (LFS). The number of jobs is measured by Workforce Jobs (WFJ) and is the sum of employee jobs from employer surveys, self-employment jobs from the LFS, those in HM Forces and government- supported trainees. The LFS also provides an estimate of the number of jobs, by adding main and second jobs, but the industry breakdown is less reliable. The LFS and WFJ measures are reconciled each quarter in an article published on our website. Jobs vacancies are measured separately by the Vacancy Survey.

Inactivity
Economically inactive people are those without a job who have not actively sought work in the last four weeks, and/or are not available to start work in the next two weeks.

Unemployment
The number of unemployed people in the UK is measured through the Labour Force Survey (LFS) following the internationally agreed definition recommended by the International Labour Organisation (ILO) – an agency of the United Nations. Unemployed people are without a job, have actively sought work in the last four weeks and are available to start work in the next two weeks; or are out of work, have found a job and are waiting to start it in the next two weeks.

Where does the data come from?
Estimates of employment, unemployment, economic inactivity, hours worked and redundancies are derived from the Labour Force Survey (LFS), a survey of households.

How is it measured?
Employment measures the number of people aged from 16 to 64 years in paid work. It differs from the number of jobs because some people have more than one job.

Everybody aged 16 years or over is either employed, unemployed or economically inactive. The employment estimates include all people in paid work including those working part-time.

Most of the figures in this statistical bulletin come from surveys of households or businesses and are therefore estimates rather than precise figures. Further information is available in A guide to labour market statistics.

The LFS is sampled such that it is representative of the UK population over a three-month period, not for single month periods.